Two high school students from C & L's service area were selected to travel to Washington, D.C. in June to attend the 2019 Youth Tour. The seven-day trip, sponsored by the Electric Cooperatives of Arkansas, will include tours of major sites in and around Washington, D.C., including the U.S. Capitol; the museums of the Smithsonian Institution; the Newseum; and the Jefferson, Lincoln, Martin Luther King Jr., Vietnam, Korean and World War II memorials.

The winners were selected through an essay contest open to all high school juniors who live in C & L's service area. These students, along with approximately 40 students from electric cooperatives across Arkansas will travel to Washington D.C. where they will join about 1,500 students from across the nation who are attending the tour. Through Youth Tour, these students will have an opportunity to learn more about their nation's government and the electric cooperatives, as well as develop leadership skills. 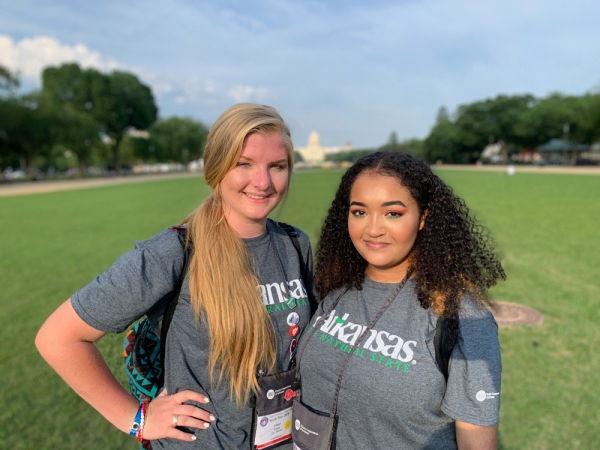 Autumn Jackson is the daughter of Rachel West. Autumn is listed in the top 10 of her class, is a member of the Art Club, and sings in the high school choir. Autumn has won many awards including 1st place in the Southeast Arkansas Regional Art Show when she was a sophomore. She enjoys painting, drawing, and being creative with makeup. She also enjoys reading, writing, baking, singing, and watching YouTube. After graduation, she plans on becoming a successful cosmetologist, and later pursue a career in journalism. In her essay concerning “What Leadership Means to Me,” Autumn stated, “Your followers’ actions reflect on your leadership because if you make choices with honesty and integrity, they will also.”

Jillian Rauls, daughter of David and Karen Rauls, will attend twelfth grade at Star City High School this fall. Jillian is in the Beta Club, plays the flute for the Bulldog Regiment, and is a member of the color guard where she served as co-Capitan in 2018. Outside of school, Jillian enjoys competing in Rodeos and Horseshows. She is a member of the First Free Will Baptist Church where she sings in the Choir and Youth Choir. Jillian competes each year in her church sponsored CTS (Christian, Training, Service) program and has won several awards at the District, State and National level in the categories of photography and woodwind solo. She loves all genres of music, hanging out with her friends, and riding horses. After graduation, she plans on attending college and majoring in nursing. In her essay concerning “What Leadership Means to Me,” Jillian stated, “leadership is a role where one person (a leader) can recognize the qualities of their followers and encourage them to use their abilities and talents to accomplish the objectives before them.”

C & L Electric is proud to have these outstanding students represent them on the Electric Cooperative Youth Tour to Washington, D.C. Congratulations Autumn and Jillian!